So a recap on a trip which truly gave me culture shock even though it was 21 wonderful days in Beautiful Kowloon Hong Kong.  Kowloon, Hong Kong was named this as it name stems from Nine Dragons which refers to eight mountains around Kowloon also a tidbit is that 48% of the Hong Kong population lives in Kowloon.

Kowloon when first explored on our first day, reminded me of the movie ‘Blade Runner,’ the large building with packed streets the architect was just so much more modern that in the states and 1000% different from in the states, I can truly say to this day it has other countries beat when it comes to Culture Shock but all in a great way!

“Dragons” are quite respected in Hong Kong, did you know each building must be built allowing a complete cut out of the building for the ‘dragon to pass through during the night.’  It’s true each building has a space where there is a big hole through and through for the dragon!  Quick note, we made friends with a lady who had a five (5) year old daughter that when she saw me she said “that lady has blue eyes like the dragon and yellow hair like the dragon,” I’m hoping that was a compliment.

Victoria Harbour was just outside out hotel window where we saw small boats they call “junks” that locals lived on, another culture shock to me as they have their pets living on these boats.  We were on a business junk headed to visit “Jumbo’s Kingdom Floating Restaurant” (this experience will be a whole different blog with photos, have you ever heard of red bean sauce as a dessert, like I said a whole different blog!) when I saw my first residential junks.  Here their dog honestly perched his little hinny over the side of the boat to go to the bathroom, at first I went ewww then I laughed, can you image your pet doing that here in the states, I hope not or the coast guard will be called to your boat, just say’en!

We stayed at The Kowloon Hotel on Nathan Road, Tsim Sha Tsui, Hong Kong … of course I felt at home the place is on “Nathan” road so close to my son’s name Nathaniel and even though he was not with us in “name” he was.  A very nice first class hotel where each “wing” of the hotel had their own assigned concierge at you’re beckoning call 24/7/365 and I do mean your beckoning call.

In their mountain area which is about 30 minutes ride from our hotel, you can find all the local vendors selling their wares/produce/creations.  Boy did I have fun these people are ‘under tall like me,’ the ladies have small feet and I truly believe in what I call God Winks as I do not speak Cantonese (since this is traditional Chinese country, they speak Cantonese and I was away from Hotel Translators) I just opened my wallet to show these sweet ladies what I had, they took what I guess they needed and on I went.  Not to mention when I returned to the hotel I was told I had not spent a lot of money, yea God Wink with enough money left to have a custom-made cocktail dress!  The Chinese bow before you when talking/purchasing/ordering meals/etc. so bow back out of respect.

I truly wish someone had told us in advance about flying to Hong Kong so here is you’re “Heads Up!”  We flew from Charleston, WVa early in the morning to San Francisco, CA and the next day our flight left for Kai Tak Airport just outside Kowloon.  When you get on the California plane about 10 a.m., they do tell you it is a 14 hour flight, this plane has plenty of room where each seat reclines back a little further than normal with foot rests.  NOW the kicker is they feed you a light lunch then begin closing all windows, turning down the lights, bring around a warm wash cloth and tell all passengers to please enjoy quiet time and get some rest because when you arrive in Hong Kong it will be 12 hours ahead of the current time in California.  REALLY, if I had known this I would have stayed up all night playing games and enjoying a bit of Vino.  Sleep, are you kidding me, I just slept for Seven (7) full hours but OK I will tried to do as instructed, I paid for this when we landed so for your future Hong Kong travel if you are leaving from CA. don’t sleep!

Last just remember when traveling to most of the Orient they are 12 hours ahead of your home state so the best time to call or text family/friends is evening.  Your evenings that is say when it’s 7pm your time it’s 7 AM their time so I tried to only connect with family/friends between 8 pm to 11 pm my Hong Kong Time but don’t expect others to remember that it’s an Honest mistake as my phone rang many times between USA 10 am (my 10 pm) and 5 pm (my 5 AM) … on well I chose to love them!

That’s a quick update on the past Hong Kong trip and I believe one of my longest blogs but hope it helps!

Until next time, keep it Real … REAL FUN that is 🙂 Brenda

The Kowloon Hotel as you head to the “streets” 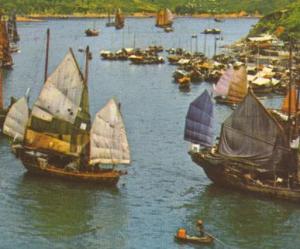 Photo of a Photo of “Residential Junks” in Hong Kong Harbour