She came from afar to visit us, one of those three (3) BFFs of mine!  The Hubs (who told me what to entitle this post) took these photos of ‘his Goddess’ and her BFF at The Parthenon pillars along with the remake of the Goddess Athena, known as goddess of Wisdom (her structure is in gold leaf where she stands 42 foot and 10 inches from floor to the top of her helmet!)

The Parthenon was originally constructed about 500 BC in Athens, Greece and remained intact until the 1800’s when the Phoenicians stored munitions in it then an enemy shell exploded and destroyed the structure.  The only thing that remains standing today are the pillars and due to the popularity of the structure in Athens the city left this temporary structure standing as is after the explosion along with a museum nearby full of historical information. 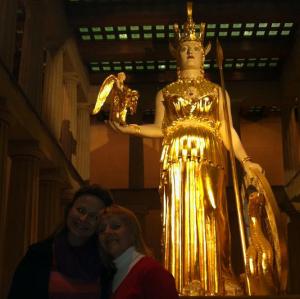 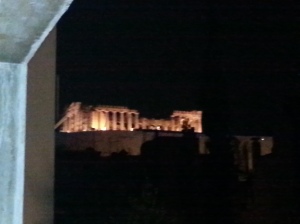 In 1897, the city of Nashville undertook building the full-scale replica for the Tennessee Centennial year as a gallery space, after that year as expected the structure started to decay, so Nashville decided to create a complete replica of the original Greek temple both inside and out.  On May 21, 1931 the Nashville Parthenon reopened to the public attracting over 10,000 visitors from 46 stated and 12 foreign countries during its first month!

Since it’s unveiling in 1931 the Nashville Parthenon still attracts large crowds daily so if you can make a Nashville trip enjoy it, BUT if you come to Athens, Greece their economy would love the American economic shot and you might see us, either way hope you have enjoyed a bit of the Hubs Greek History!

Until next time, keep it Real … REAL FUN that is!  Brenda

One thought on “Goddesses”